I shopped til I nearly dropped this weekend - holy cow were there a lot of sales going on! I was posting about them on Facebook and got a request to show what I found. So I snapped a few quick photos - sorry for the poor quality, hopefully you'll get the general idea... 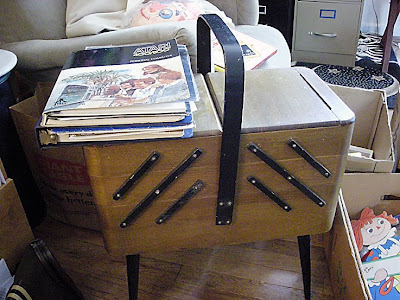 Will is not particularly happy about this particular purchase - can you say packaging nightmare? It's an old fold out sewing box, too great a score to pass up. We'll figure out how to ship it before we list it... On top are some old Atari computer manuals. 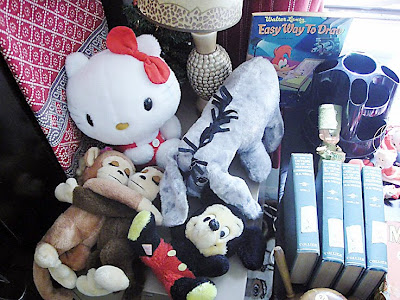 This weekend had a toy theme - which will become readily apparent as we go along. Friday I grabbed the vintage Hello Kitty, Eyeore, Mickey, and Daking hugging monkeys all from the same sale. (I had those monkeys when I was a kid, and this is now the 2nd set I have found. I didn't keep the first set, so suppose I'll survive if I don't keep this set either...)

The books are a set by H.G. Wells called The Outline Of History. The book with Woody Woodpecker is a Walter Lentz how to draw book - kinda neat! 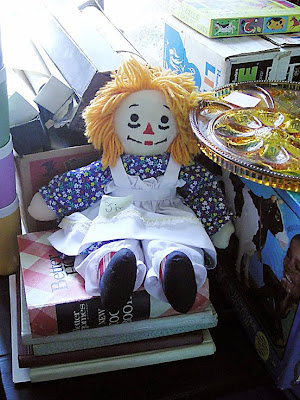 I found this Raggedy Friday too - little did I know she was just the beginning! Under her are four 1940's yearbooks, and a BH&G cookbook. 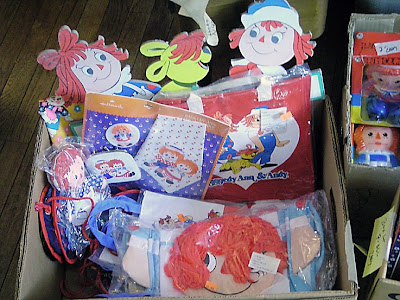 The estate sale I went to Saturday had a TON of 1970's Raggedy Ann and Andy stuff, most of it still in its original packaging! I'm sure I've mentioned here before that my "Raggy" went EVERYWHERE with me when I was little, so you know there is no way I could have left all this great stuff behind! 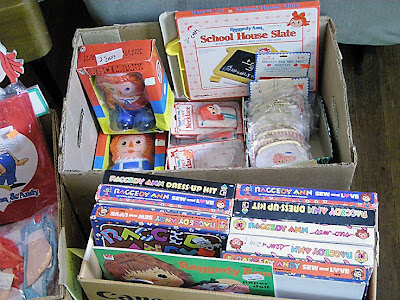 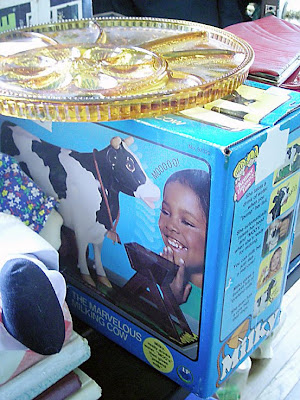 Also at yesterday's estate sale I scored this... do you know what it is? Here's a hint. 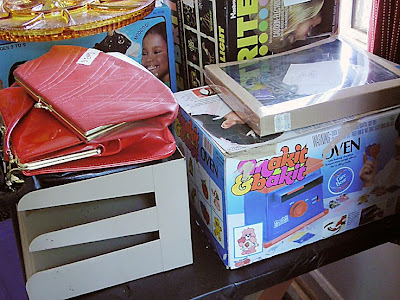 Check out the Makit & Bakit oven I got - it has a ton of the suncatcher frames and crystals with it, including Care Bears! Behind it is an old Lite Brite. I'm tellin ya, it was a toys toys toys weekend! 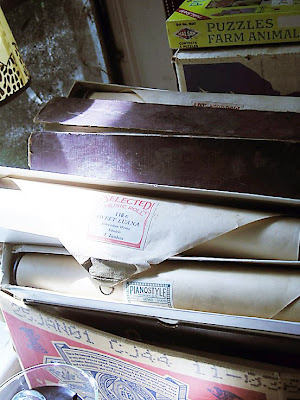 Now this is a neat find - a box full of old player piano music rolls. I have to sort through them and see which ones are good and which ones aren't, but it should be worth it!

There's more, I could be here posting all day I bought so much! But, I need to get to work - this stuff doesn't list itself, unfortunately! ;)

Oh, before I go - there was one thing I would have loved to grab that I had to leave behind. For ONE DOLLAR I could have had a PINK vintage salon chair with attached hair dryer. PINK. One lousy dollar... *sigh* - I have no room, and no way to sell it. I hope it ended up going to a good home!
Posted by Mitzi - Vintage Goodness at 7:54 PM

Do the legs unscrew from the sewing box? That might help. I have a vintage sewing bench put together that way. LMK when you list it.

OMG! You did not get the pink chair! AAARRGGHH! Great finds especially the Raggedy Ann. I have been looking for one for myself. That is what I asked for Christmas when I was 14! I found the same Woody Woodpecker Learn to Draw books a couple of weeks ago. I don't understand why you buy things and then turn around and sell them! I can't bear to part with my goodies! Does that classify me as a hoarder?

i had a raggedy andy that my mom had made for me (my family calls me 'andy'). i didn't carry it around, but i did display it proudly in my bedroom.

don't you hate when you find something cool and you know you don't have room for it! it happens all the time with me and mid-century cradenzas and hutches.

I had those monkeys too. When I was a kid I collected stuffed animals, I was going for a Noah's ark kinda collection, 2 of every animal! Wow, I guess I was a collector from the start. We also had that cow. I frikkin' loved it. I have a pic of me someplace riding it in a diaper. Great stuff!

I used to have that cow! Ohh the memories. Have fun listing them! :)

I need those monkeys! Did you already list them?