*Note - Since I published this post a couple of people have left comments saying that some of the items here are not from Dorothy Thorpe - I found one link stating that the faded pieces are not DT, only the banded ones are. What I couldn't find is anything saying who the faded pieces are actually by - if anyone knows leave a comment! :)

I'd never heard the name Dorothy Thorpe until I picked up this, which is currently up at auction on eBay: 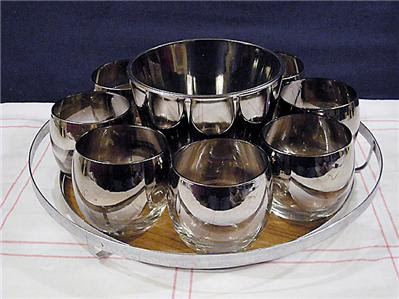 Dorothy Thorpe Silver Fade Roly Poly Glasses & Ice Bucket Set
Luckily a bit of quick research brought her to my attention, and WOW - talk about some great stuff! I guess Dorothy Thorpe items have been seen on the TV show Mad Men, which is, of course, super hot right now.
From Glass Encyclopedia:
"Dorothy Thorpe was an artist who had a decorating studio in the Los Angeles area, and in her heyday (probably 1930's and on into the 1950's) she purchased glass from various companies, decorated it, and sold it. Most of her pieces are signed. She also designed glassware and ceramics.

She used a trademark of a large printed T in the center with a smaller stylised D on one side, and the same image in reverse on the other side. This trademark is often etched onto the side of the piece, near the design.
Many of her pieces have sand-blasted or deeply etched designs, but she also worked with silver overlay. Her designs are found on Heisey glass pieces, Cambridge glass, and many others from that period."
I'm completely smitten - let's have a look at some other Thorpe silver pieces that are up for grabs right now and have a nice drooling session together, shall we? 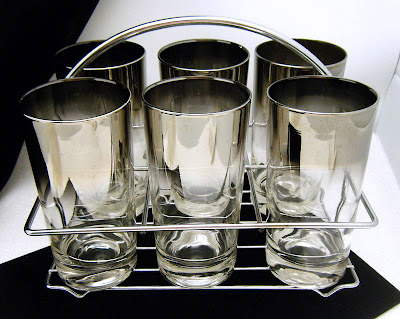 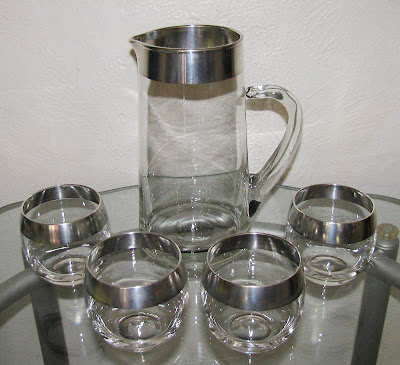 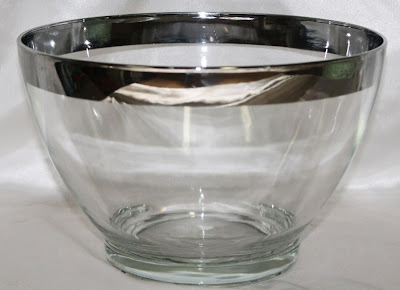 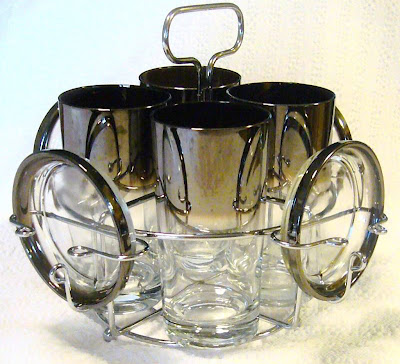 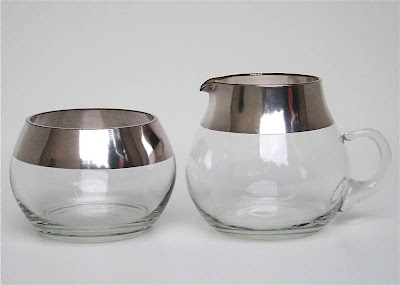 Dorothy Thorpe Silver Band Cream & Sugar Set
Hmm, why do I suddenly feel like a drink? ;)

I just became a fan of Dorothy Thorpe. Beautiful. Thanks for the informative post.

What beautiful glassware! I'd personally kill to come across a vintage piece of Steuben crystal glass!

Many of the pieces you show here ARE NOT Dorothy Thorpe. What some people call 'silver fade' is NOT Dorothy Thorpe. One person selling on Ebay sees some other schmuck list it as such so they just assume it is. Now people list anything that has a silver rim as Thorpe. What a crock. There are no references whatsoever on any site with any authority that will tell you that these 'silver fade' glasses are Thorpe. Only the thick brushed silver or chrome are Thorpe.

I too have some of Thorpe's work listed on my "anteekgeek" shop on Etsy. Its a beautiful charger with etched pine trees. A OOAK piece, not seen before by many long time Thorpe collectors! Signed in full in stead of the more familiar DTC mark. A truely unique dish. Check out my shop, or just do a search for Dorothy Thorpe Charger. Several nice photos give you a glimpse.

Sorry but this is NOT Dorothy Thorpe. Please do more research. Unfortunately, eBay is not a reliable place.

People ALWAYS think those chrome fade glasses are Thorpe... Only the ones with the sterling band we're by her.